You are viewing documentation for LioranBoard 1, which is obsolete. It's highly recommended to use LioranBoard 2 instead.

Stack is a special variable which can hold more than one value at a time. It works similar to an array in other programming languages.
If you have a list of items (for example viewer names), storing them in single variables would look like this:

This seems quite inefficient if you happen to have a lot of names to store. The answer is to store them all in a stack, which can hold many values under a single name and you can access them by referring to an index number: stack names = ["Lioran", "Neverwho", "Daryl"].\

If you want to retrieve a specific value from a stack, you can use the following formatting: [position]stackname. Going by the example above, [2]names would retrieve 'Neverwho'. [position] can also contain other variables or complex math.
Stack values can be viewed by pressing Tab in the main Receiver menu and typing the full name of the stack.
In the TAB window you will see at the top of your screen the position 0, and at the bottom the last position. However, the TOP position of the stack is still the last one, and the BOTTOM position is 0. Be careful as this can be confusing at first. 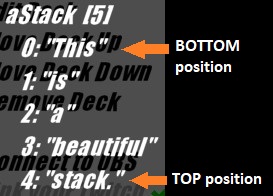 One thing to note is that a stack is cleared every time you close or reset Receiver. If you wish to save it, you can use Stack: Stringify and File: Save String commands.

Adds a value to a given stack. Will create the stack if it doesn’t exist yet.

The position you’re adding the value to can be:

Any position index higher than the stack size will be regarded as the top.
Edit

Replaces a value inside a stack, overriding the previous one. Position remains the same.

Pulls a value from a stack by deleting it from the stack and saving it inside the selected variable. All stack positions will be shifted by one.

Finds the first instance of a given value inside the stack. Needs to be the exact value.
Return -1 if not found.

The value you're trying to find needs to be an exact match (case sensitive) to the stack value.

Greet chatter at their first message (every session) 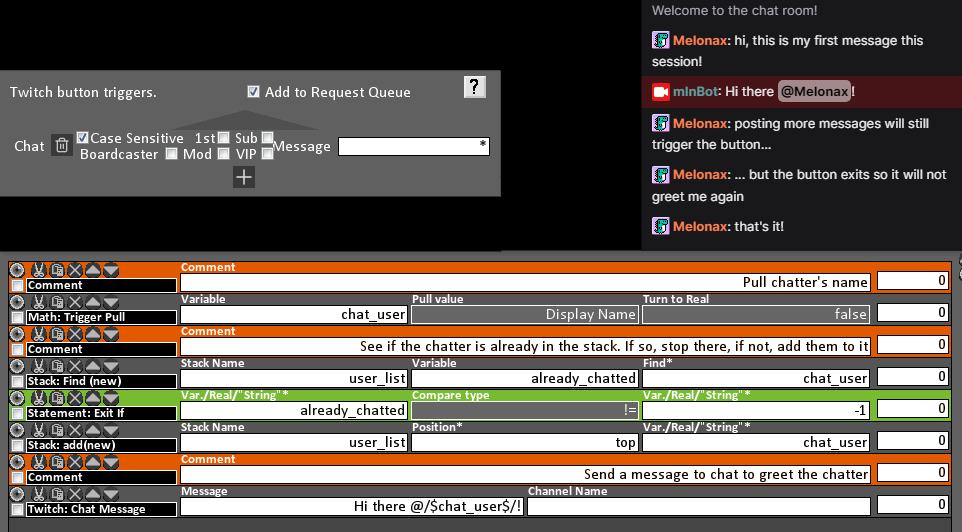 Returns the size of the stack (= how many values it holds) and saves it into the given variable.

Sorts a stack alphabetically or numerically (depending on its values) in an ascending order.
If you have a mix of real and string values in your stack, it will sort it based on the first stack value.

Need to add weights? Create a second stack with the same name +_weight added to its name and add values that will act as weights (chances to happen) to add to the randomization.
Edit

Shuffles a stack, randomizing the order of every value in it.

Joins two stack together.
Appends another stack at the end of first stack.

Returns a JSON string of the whole stack.
First value will be listed as “0”, second one as “1”, etc., “name” and “size” values will be also included.
Default JSON string format is {"size":3, "0":"white cat", "1":"blue car", "2":8}.
You can use this command together with File: Save String command to save the stack values into .ini file. Once loading it back from the .ini file, you can use Stack: Parse to turn the JSON string back into a stack.

The JSON string must contain size value and the corresponding amount of values for the command to get properly executed.