Button doesn’t do anything #

Check whether the button is triggering #

Unless you’re triggering the button by pressing it on the stream deck, it’s possible that your button didn’t work because it isn’t triggering properly. There are two ways to check whether your button triggered:

Possibility A: The button did not trigger #

Your button not triggering at all could have three causes: either your button trigger is incorrect, the button is being blocked somehow, or LioranBoard doesn’t receive the trigger at all.

Check whether your trigger is correct

Check whether LioranBoard is receiving the trigger 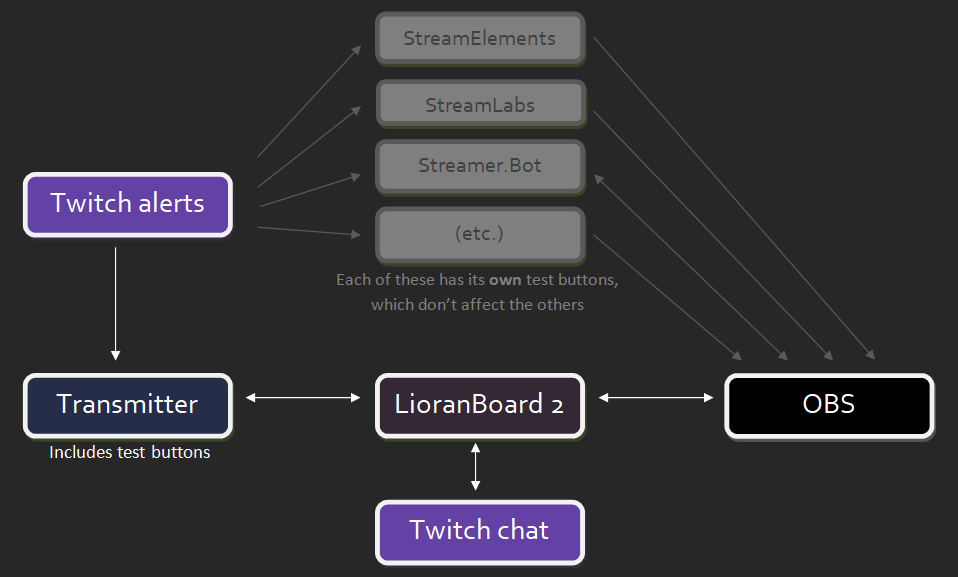 Check whether the button is being blocked

If you can’t figure out why the button is blocked, try restarting LioranBoard. That should allow you to start fresh.

Possibility B: The button did trigger #

If your button triggered when it should have but nothing happened, that means something is wrong with your commands. Check the ‘Button doesn’t do what you want’ section below.

If you’re using the latest LioranBoard version (2.07.x), the crash log will show you which button and command made it crash. On older versions, it’s a bit harder to decipher. You can update via the settings button in the bottom left of the receiver. 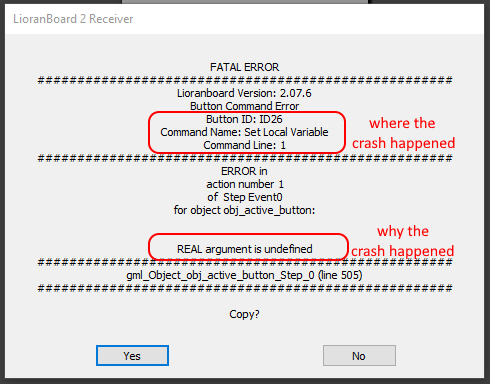 Be aware that the crash log tells you what command crashed LioranBoard, but the error could have been made in a command that executed earlier! Use that information (and what the actual error says) to troubleshoot using the tips in the next section.

Button doesn’t do what I want #

There are almost infinite ways a button can go wrong, so it’s impossible to be exhaustive here. We will give you some tips and useful things you can try to find the culprit.

If you see the word ‘undefined’ (in error messages, crashes, text sources, chat, etc), that means you are using a variable that has not been defined previously. That can either mean you have to define it yourself (see Init Variables) or that you are not waiting enough time for a command (like Fetch OBS Data, Get HTTP Request, Get User/Game/Channel Info or an extension command) to retrieve information (use Wait Until Variable Exists command to fix it).

Variables, arrays and objects are a fundamental part of LioranBoard. You need to know how to use them to unlock the full potential of LB. Please read the variable introduction about how to use them and how to use the White and Yellow Boxes. if you are not sure.

Showing previous information, results only work after the second press or actions are being made in the incorrect order (or at the same time). #

There is probably a problem with your delays (or wait commands, see Common Errors with Commands below). Delays in commands are effective from the start of the button, not from the last command, no matter what order your commands are in. If your first command has a delay of 2000ms and your second command has a delay of 0ms, the second command will run first, and then the first command. Check Command Delays for more information about them.

Issues with Filters and Sources #

Check whether you are connected to OBS. Check Common Issues in Troubleshooting. If the source is inside a group, try taking it out to see if that makes a difference. The OBS websocket has a lot of issues working with groups, so if you use groups and LioranBoard cannot find them or work correctly with them, consider using nested scenes instead.

If it still is not working… #

If you tried everything and you still don’t know what’s wrong, don’t be afraid to ask in our Discord server. Please share with us a brief explanation of what you want to achieve and what doesn’t work. Also, show us a screenshot of the FULL button that doesn’t work or crashes and the error message (if you got one).